True to our mission, music and art are indisputably intertwined. Case and point, legendary artist, MEAR ONE, explored the symbiotic relationship between music and artistic expression, as he partnered with Jam In the Van, to create a unique, immersive mural completely covering a large recreational vehicle that will double as the world’s first solar-powered mobile music discovery platform. The RV, which MEAR ONE loosely named, “Supernova Cosmic Recording Machine”, will appear at various music festivals, embarking on an eye-catching journey to inspire the musical masses.

On one side of the RV, MEAR ONE has depicted a female siren, emanating radiant energy across the moving canvas, a suitable metaphor for the vehicle’s solar capabilities. MEAR ONE was inspired by “Janis Joplin, Jimi Hendrix, and psychedelic time travel music”, which is an oddly, accurate description for the depictions, enhanced with the artist’s signature spray paint spatters, intricate line work, and transparent color fades, all being techniques that have been perfected in his long-spanning graffiti history. 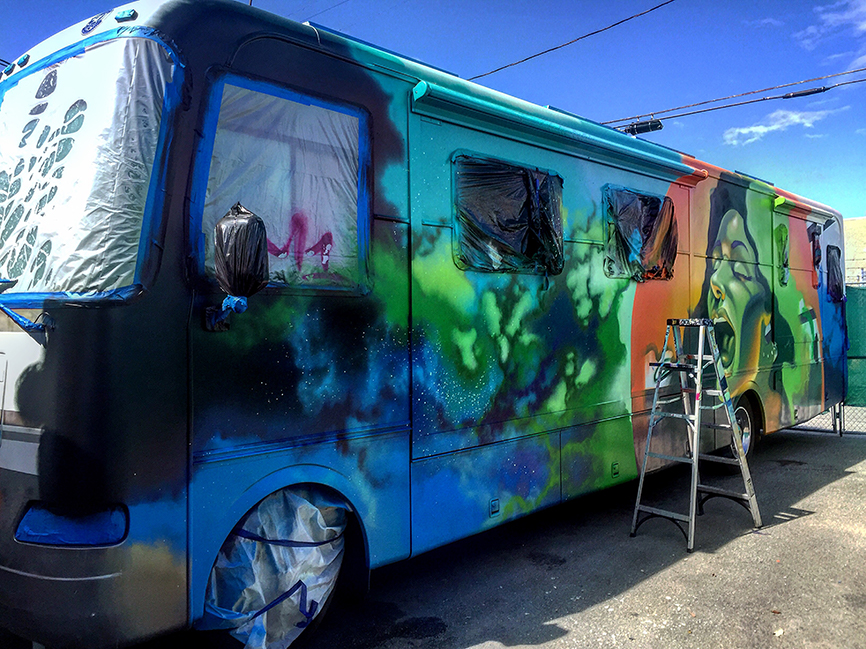 For the other side of the RV, we see the cosmic, psychedelic aesthetic amplified into a guitarist from another world entirely. The guitarist evokes a super-human persona, like a villain from the Silver Surfer or a sci-fi graphic novel, surrounded by stars, nebulas, and star-birthing systems. “A surface that is built upon in layers”, providing a visual foundation for the elaborate, finishing details within the piece. While MEAR-ONE left the subjects open to interpretation, the influences are apparent to “hip” viewers with a fundamental understating of music and street art history. 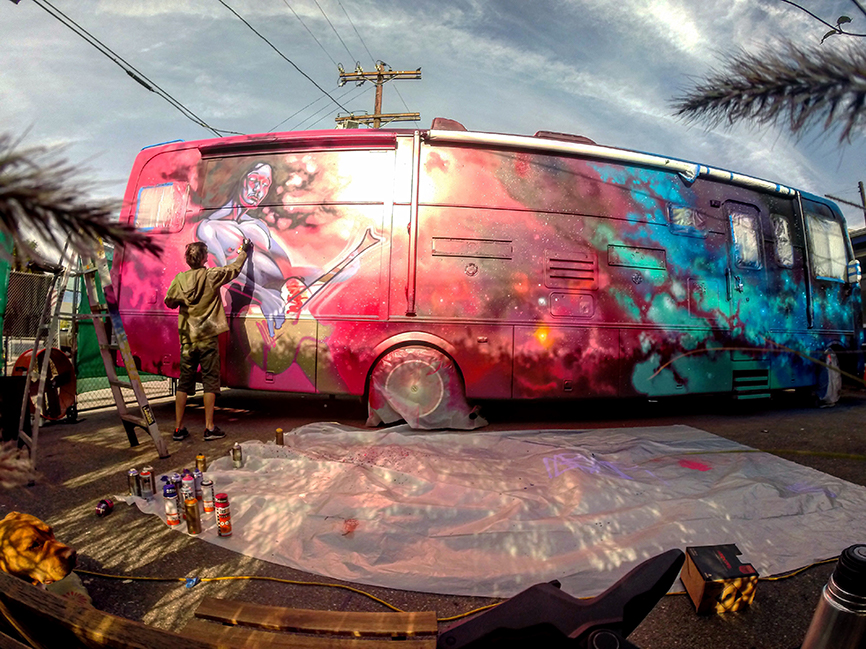 For street art appreciators, MEAR ONE maintains that while he is mostly a solo artist, he remains connected to some of his contemporaries, like RISKY, VILE, Yem, Eyeone, and several other fellow Los Angeles artists from the CBS and WCA eras.

From a musical perspective, we asked MEAR ONE what musicians / bands have been in his heavy rotation, “I usually listen to a lot of hip hop or electronica”, he said, “but I grew up on psychedelic rock n’ roll, like Led Zeppelin, Jimi [Hendrix], and all that good stuff, but they [Jam In the Van] introduced to some interesting musicians like Gary Clark Jr. and some really great new music.” On the other hand, MEAR ONE is adamantly critical of today’s auto-tuned “pop” music industry, and that valid critique is perhaps what aligns his latest piece seamlessly with the “Jam In Van” ethos, as there is a yearning to nurture more underground “real” artists. Grassroots hip-hop artists coming out of Low End Theory, such as The Gaslamp Killer, prove to be a more geniune, progressive drawing point for MEAR ONE. 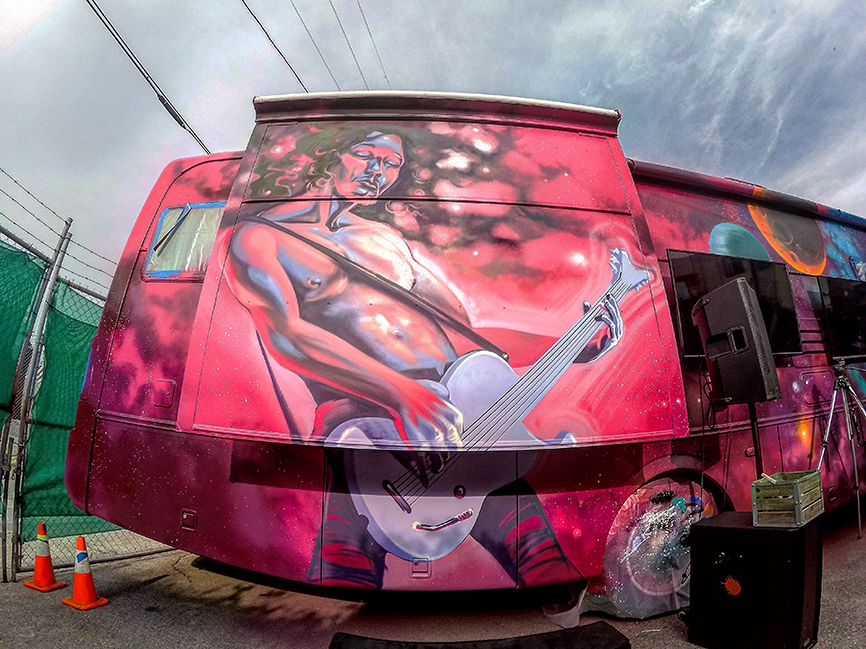 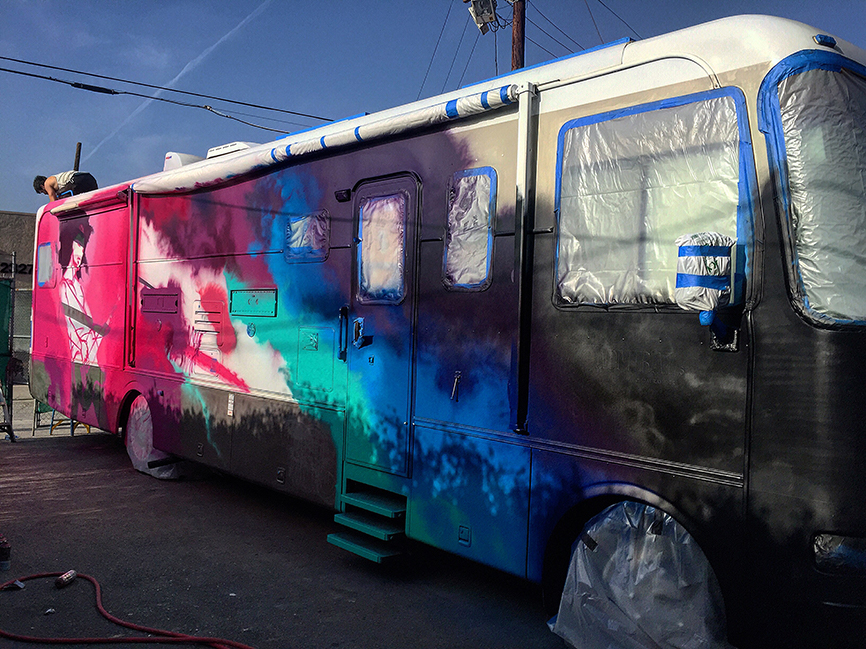 On the same token, Jam In the Van will have one of the most effective test beds, in their mobile recording studio, for exposing some real independent musicians, as evidenced in their extensive archive of sessions seen on the “Jam In the Van” YouTube channel. They’ve even done a session with a Chelsea Tribe band that we recently profiled, Corners.

Easily one of the most diligent living artists, MEAR ONE will not only be doing several live painting demonstrations at festivals this year, but also some planned murals in New York, as well as setting aside some significant studio time to create his next body of work, tentatively titled, “Cognitive Resonance”, following last year’s exhibition, “Cognitive Dissonance”.

Stay tuned, as we keep up with his latest projects and be sure to check out the official MEAR ONE website for more in-depth masterpieces. 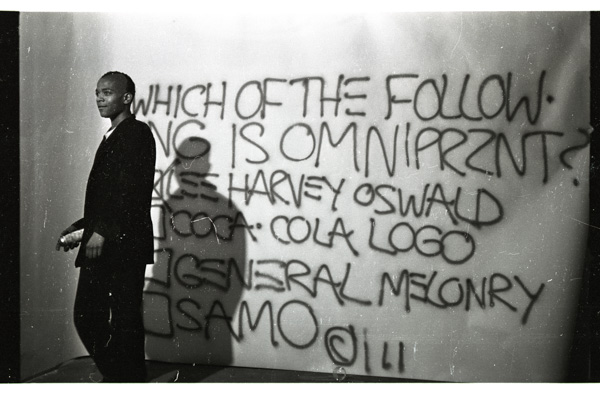 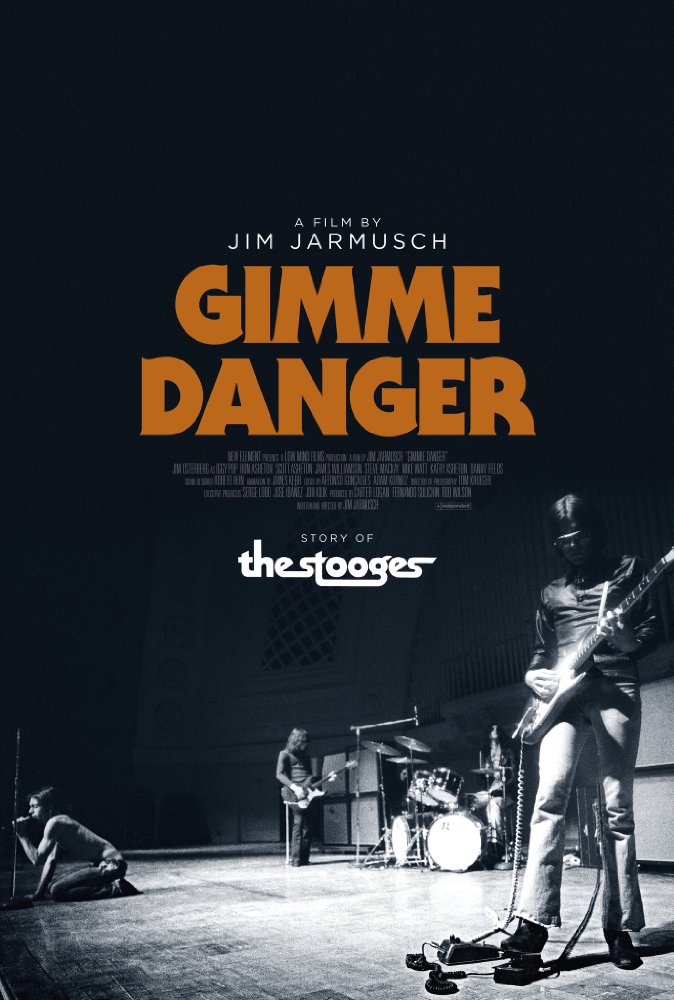