About the Chelsea Tribe

The Chelsea Tribe is an online magazine and collective of artists. One cohesive launching point, with a pulse on pop and counter-culture. This blog will be regularly updated to feature interviews and unique, historical perspectives into cities like Los Angeles, New York, and London. Currently, The Chelsea Tribe is spearheaded by Bobby Carlton and Shane Hirschman. 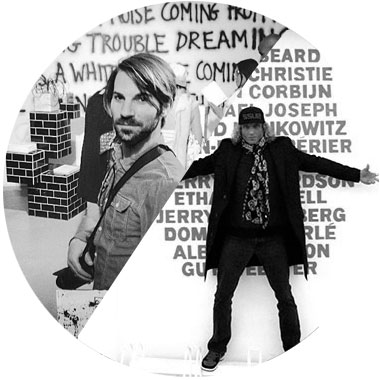 Shane is a multimedia artist based in Los Angeles, California, where he studied Design | Media Arts at the University of California, Los Angeles (UCLA). For more than 8 years, Shane was Studio Manager at the online media agency, Evolve Media, where he was involved in creating video content for the lifestyle network, CraveOnline.com. As an additional creative outlet, he was also a founding member of COLLABO, a visual collective that performed live visuals for many major-label music acts, as well as the design and production of unconventional media art installations. Shane has executed multimedia work for such clients as Sony PlayStation, …Lost Enterprises, EyeWorks, UCLA CAP, Hammer Museum, LACMA, Antiquiet, HARD, and Partizan, as well as the following music groups: Gothic Tropic, Send Medicine, and FIDLAR.

Within the realm of visual arts, Bobby was the Founder and Owner of The Shooting Gallery, a rock and roll photography gallery, formerly located on the Sunset Strip. Bobby then managed the legendary street / graffiti artist, Risk, from exhibitions at Art Basel through Jeffery Deitch’s “Art In the Streets” at MoCA. At the time, Risk was the only artist to be in 8 group shows, plus numerous solo shows, all simultaneously during “Art In the Streets”.

An avid photographer himself, Bobby has shot an extensive catalog of street art and murals, with his photos appearing in Hol’ Up Magazine and more.

Having gone through the school of hard knocks in the East Coast, Bobby has recently been featured in the documentary, How to Make Money Selling Drugs, which shines a bit of light into his adventurous past. These days, Bobby is a shining beacon of wisdom, using his 20 years of sobriety to help others get sober and stay sober.