Leading German graffiti artists and storytellers, HERAKUT, comprised of HERA (Jasmin Siddiqui) and AKUT (Falk Lehmann), are gearing up for their highly-anticipated exhibition, “Masters of Wrong”, at the Corey Helford Gallery. We interviewed HERA about the duo’s latest artistic series and the profound political overtones.

We also have an exclusive preview of the work to be debuted at “Masters of Wrong”, as well as some behind the scenes photos of a massive mural they just painted for Culver City High School.

What’s your main inspiration behind the “Masters of Wrong” series? Are there any specific subjects part of an overall narrative?

HERA: 2013 and 2014 we were almost completely absorbed by the horrors of the Syrian war, ISIS terror, Boko Haram massacres, the Israel-Gaza conflict and all its victims. We spent time in the Middle East, helping our friends from the non-profit organization aptART (Awareness & Prevention Through Art) spread murals in the North of Jordan, where thousands of displaced families wait on a new change on life. For the first time, we were actually proud to be “street artists” as we were able to get kids involved in workshops and inspire them to create something beautiful for the whole community, when all they usually see is destruction. 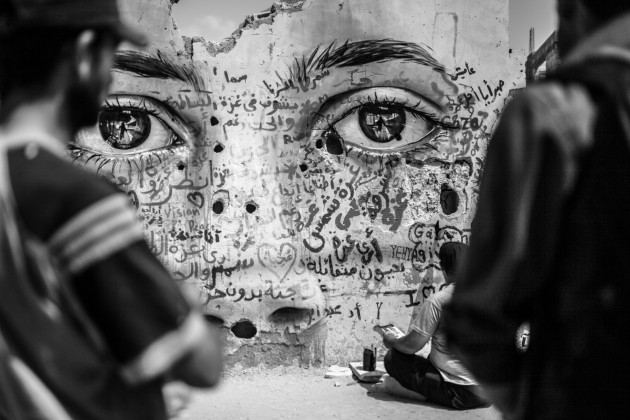 Those trips to refugee camps and host communities, as well as our work with refugees in Germany or Akut’s work in Gaza were important life lessons and we surely became more humble and thankful people, but at the same time, we realized that we need to step back a few more inches in order to stay sane. That said, our new show really was therapeutical for both of us, because we turned away from the big global crises to search for what’s wrong in that small world of pop culture. We looked at those battles individuals take on and illustrated them using childhood heroes, e.g. DC’s Catwoman, who is known for being a thief, but we show her as a single mom with a “big litter” who steels for a living as she has all these mouths to feed. “No one is born a criminal” is our subtitle to this image. Mixing personal and social struggles with our favorite pop stars, is the overall subject matter of this show. And it was our way to smile again, as humor really is the best kind of therapy.

In the piece, “I Could Sit With You Forever”, what ideas are being conveyed, specifically with regards to the “Y Generation” / “Millennials”? Or, are you just depicting Pokémon© as visual pop-culture snap-shot?

HERA: My very first encounter with Pokémon was in 1999, when I tutored the kids of an Indonesian ambassador, who just moved to Frankfurt, Germany, from Jakarta. Indonesia and East Timor were fighting a civil war back then, and the ambassador’s boys were mostly left to entertain themselves. They didn’t speak German, had no social contacts and basically spent every free minute paling Pokémon and watching Anime. It was their safe place. Imagination can do that. We can project everything into anything really, and our industries know how to make use of it. The market for love substitutes for all ages is vast! That is what our Pikachu-reference is all about. 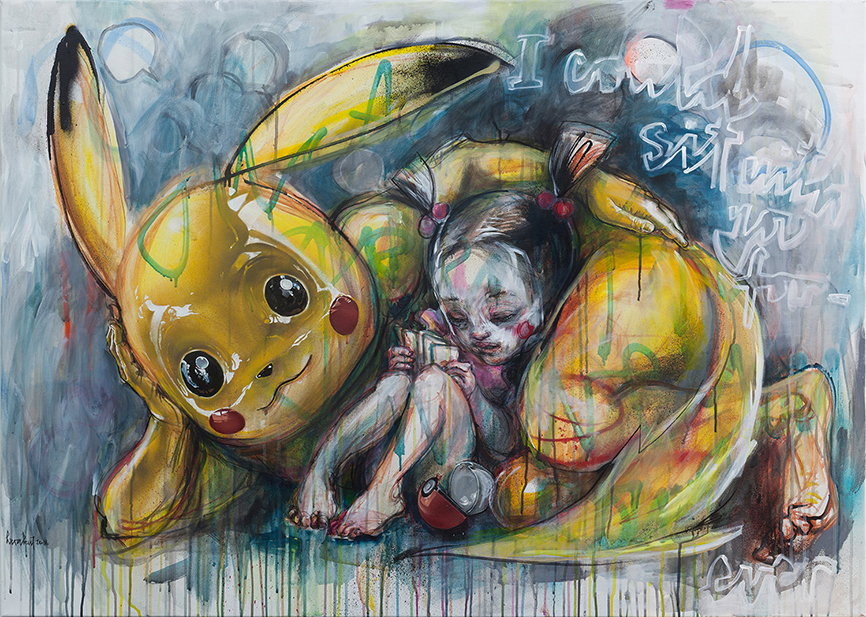 In the piece “Who Is Too Blame”, what is the symbolism of the vultures and deers?

HERA: That piece is the only one we painted in 2014, therefore it still reflects our experiences in the Middle East, where the question “Who Is To Blame???” is evident everywhere, with no good answer really. In our painting, the deer-mother character cries over her dead fawn, while the vulture-mother defends her own children, as they were born into their role in life, just as innocent as the deer. Who can blame anyone what side of border they were born in? We are using anthropomorphic symbols, for a situation you could find between Israelis and Palestinians since 1948, between Irish Catholics and British Protestants back in 1970s, or between Syrian Pro-Bashar and Free Syria Army fighters for the past 5 years. So, even though, we don’t know the correct answer to this question, we know that “children” is definitely a wrong one. 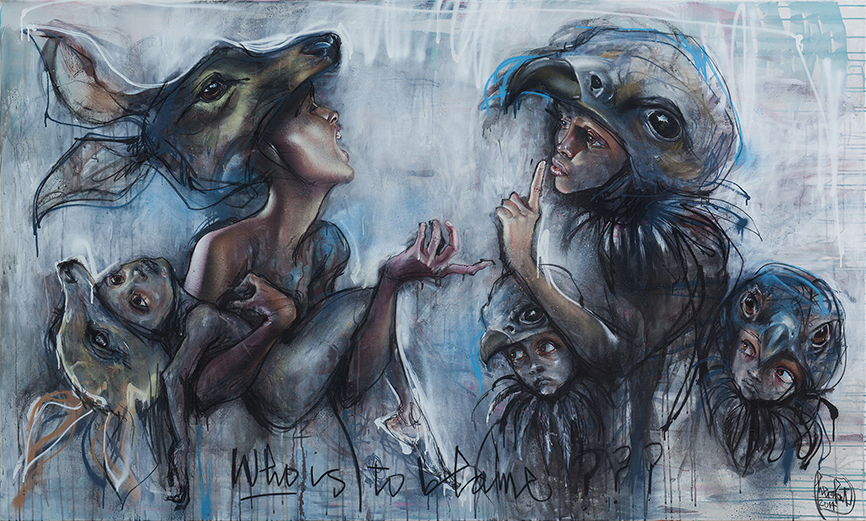 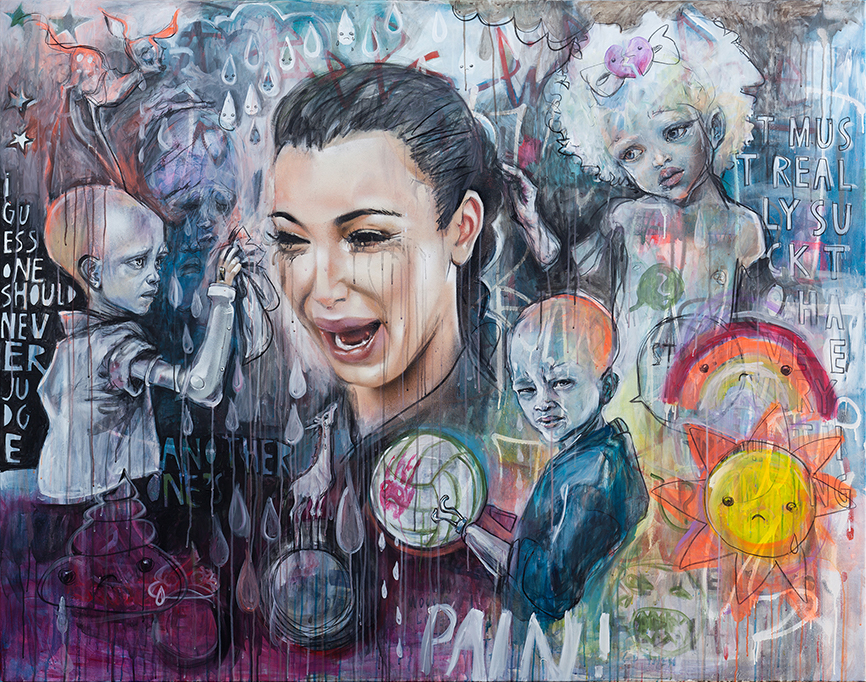 The Chelsea Tribe will definitely be there catching all the action. For those abroad, a collection of their work can also be found in their books Herakut: The Perfect Merge and After The Laughter – The 2nd book of Herakut. More information can be found here.

In conjunction with their busy week in Los Angeles, below are some fresh photos from HERAKUT’s collaboration with the Culver City High School art program, in which they created a beautiful mural on a massive exterior wall on campus. 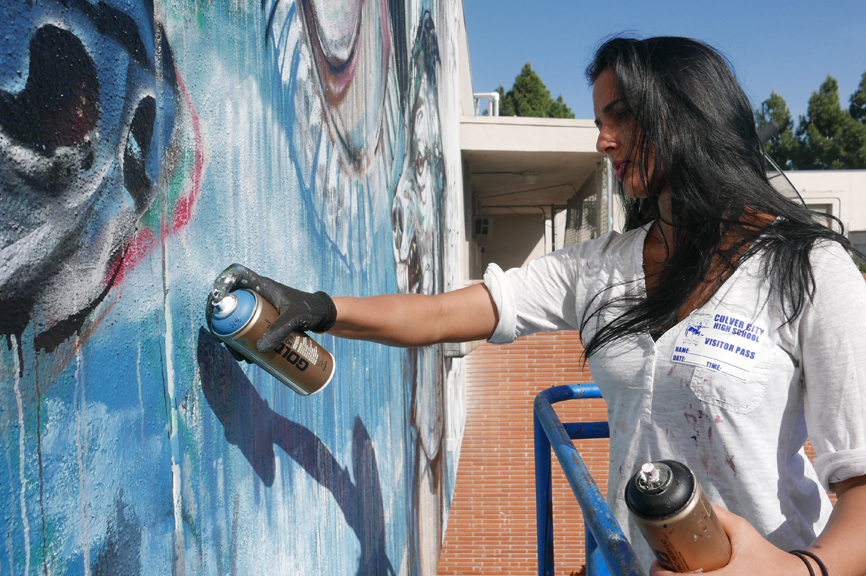 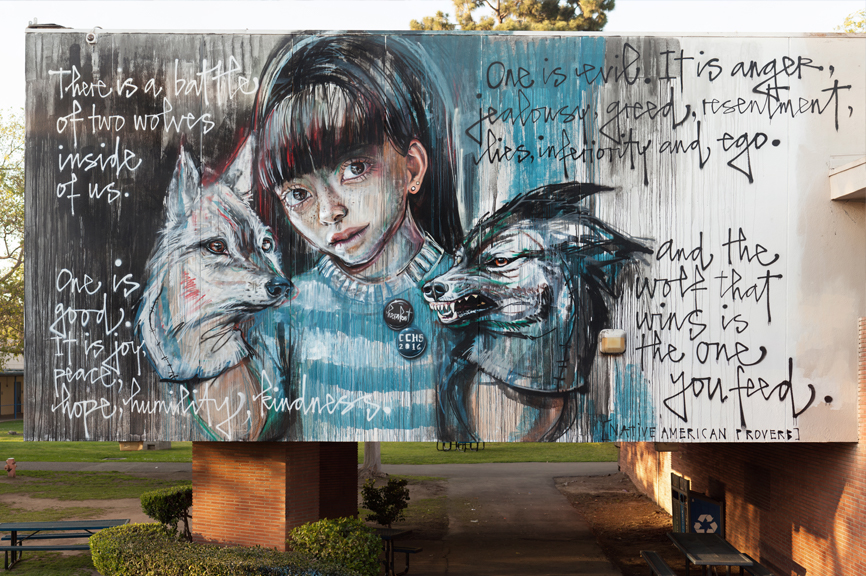 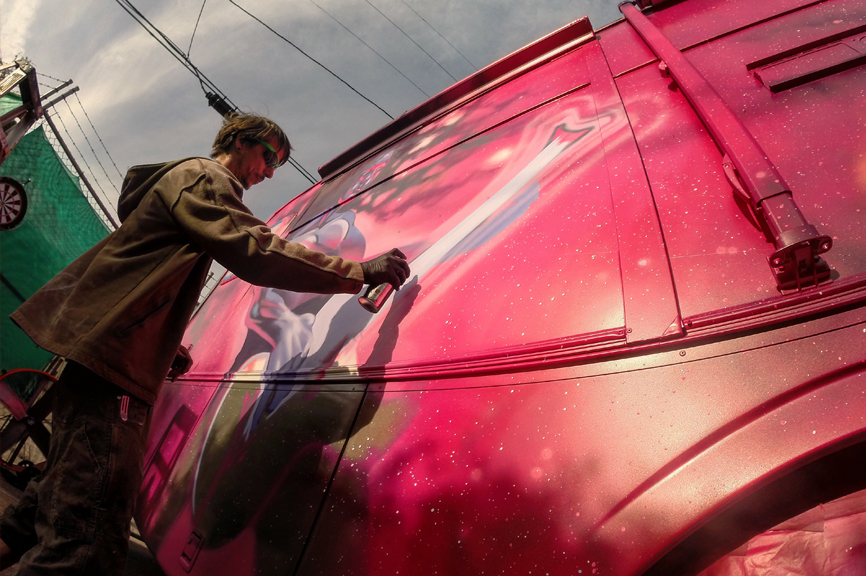